IT WAS GOING TO BE A GOOD DAY, UNTIL IT WASN’T

Baby number three, means cake walk pregnancy right? You know what’s going to happen about when. The pregnancy tracker is just your memory bank because you’ve done this two other times. Peeing in the little plastic cup without missing is second nature at this point in your life, so when it came time for my twelve week appointment with our surprise baby number three I KNEW what was going to happen.

I KNEW I was going to get to hear the heartbeat for the first time vs seeing it only beating on the sonogram. I KNEW I was going to call and inform my husband that all was good just like the other two had been. I KNEW after this appointment I’d be immediately sharing the news to the world, cause we were at week 12 and that’s what you do.

Again in life God laughs at our plans, but this time I didn’t find it funny that my plans weren’t being played out. It wasn’t funny at all.

Upon the doctor trying to find our little ones heartbeat with the doppler and being unsuccessful, I was to have a sonogram. “No big deal, I’m only 12 weeks it’s quit common of a situation.” Is pretty much what I told myself cause it is true. Soon I was laid up on the table with the cold goo squirted on my belly while the technician did her thing. There was a little small talk and of course a heartbeat. Again I KNEW everything was just fine.

I was sent back to the room to wait to talk to the doctor. My doctor was busying about and saw I was back in the room, she asked if I was done already and I told her I was and we saw a heartbeat but the technician was looking for her. A few moments later my doctor made the official entrance to the room and sat down and told me everything that I DIDN’T know.

“You’re baby looks to have some fluid on the back of their neck. This is called a Cystic Hygroma.”

“OK…” I still naively think all is well at this point.

“So what does that mean?”

I get the information that more than likely there is some chromosomal defect and probably in the form of down syndrome, maybe Turner’s or Noonan’s. I was also told though rare it could be nothing at all but unlikely… we are talking less than 20% unlikely.

My world shattered. The tears flooded my eyes though I tried to hold them in while I had blood drawn. I tried to wear a smile on my face but it was breaking. The sweet lady who took my blood saw my expression and gave me the sweetest hug. Bless her. I held it in as I checked out, and skipped seeing the benefits person cause I couldn’t hold it in much longer. Scampering off to the car while fishing out my phone I made the call to my husband. Talking through tears is impossible, I spew what words I remembered the doctor telling me. My sweet, wonderful husband tried to calm me down the best he could over the phone. I gathered my composure to make the drive home. I texted work, and my stepmom because talking on the phone wasn’t going to happen. The rest of the day was spent in bed crying.

The odds were not in our favor.

Our baby had a cystic hygroma of 9.5mm is what the specialist told us at our Monday appointment. They also confirmed all the things we read and learned from the internet. We also learned we were expecting a baby girl. This news made the odds even more skewed in the wrong direction. Being a girl the likelihood was Turner’s syndrome was causing the cystic hygroma. If it was Turner’s there was a 1 percent chance she’d survive pass utero. More than likely I was going to miscarry midterm 21-24 weeks was the guess. After this appointment I was better emotionally. My game face was on and we were going to fight this battle.

I did a little impromptu “planner girl” photo shoot with my little mini me. I had happen to get the idea when I saw her drinking her hot chocolate from Starbucks and thought this would be fun. Complete with the baby and kitchen in the background it was a flashback to 4 years ago with me when she was a baby. She did surprisingly well with direction on this. I think I’m going to have to create other “mom” moments with her 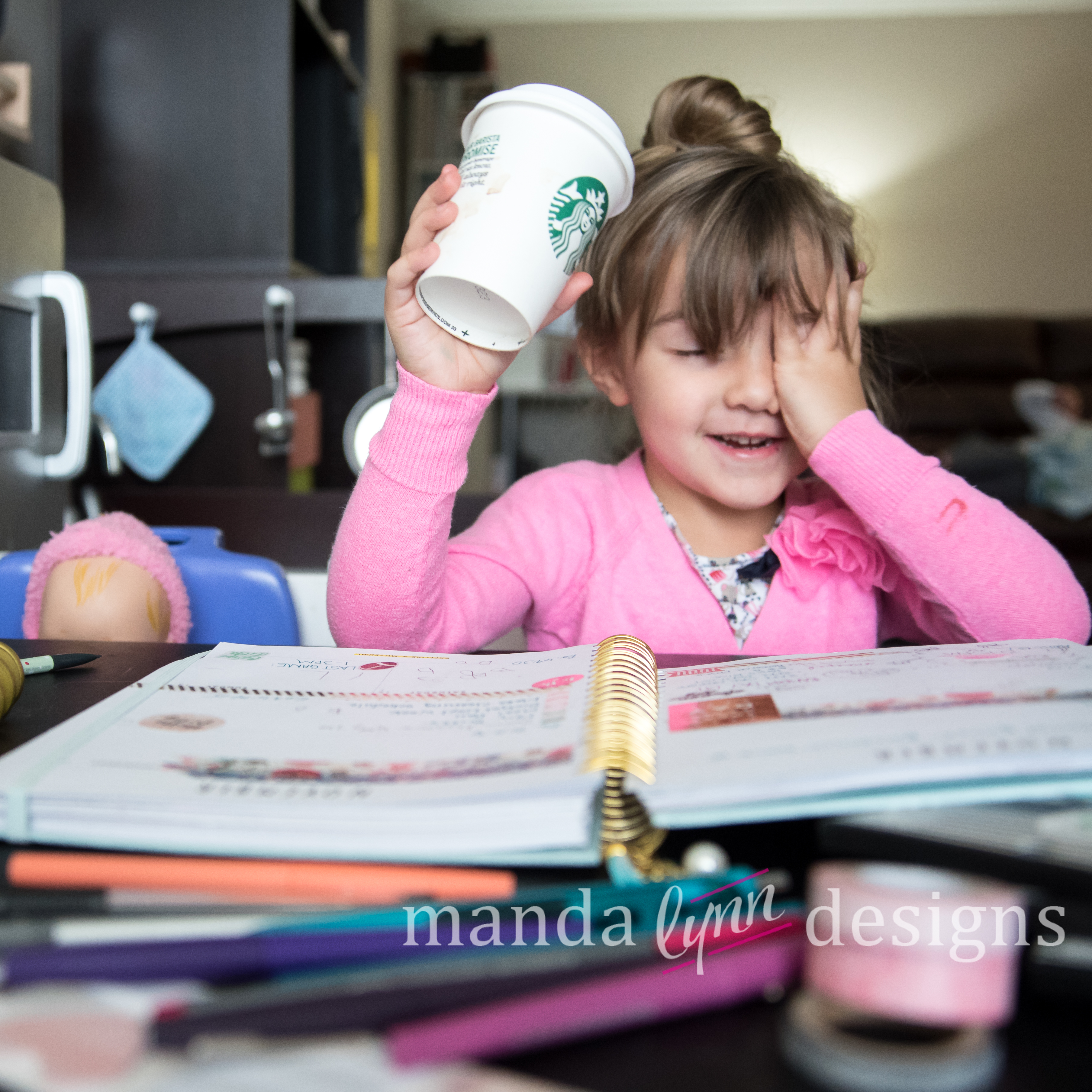 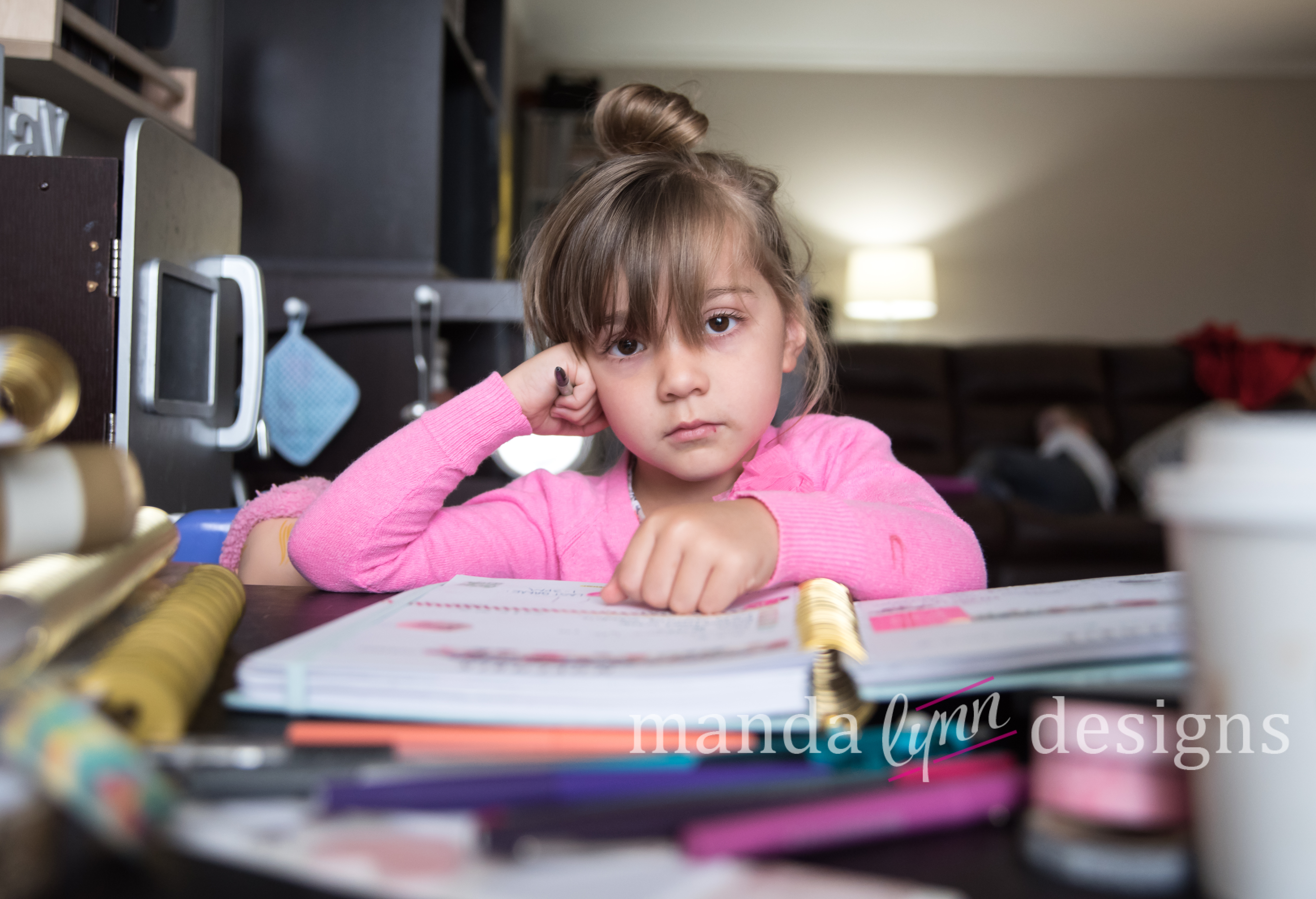 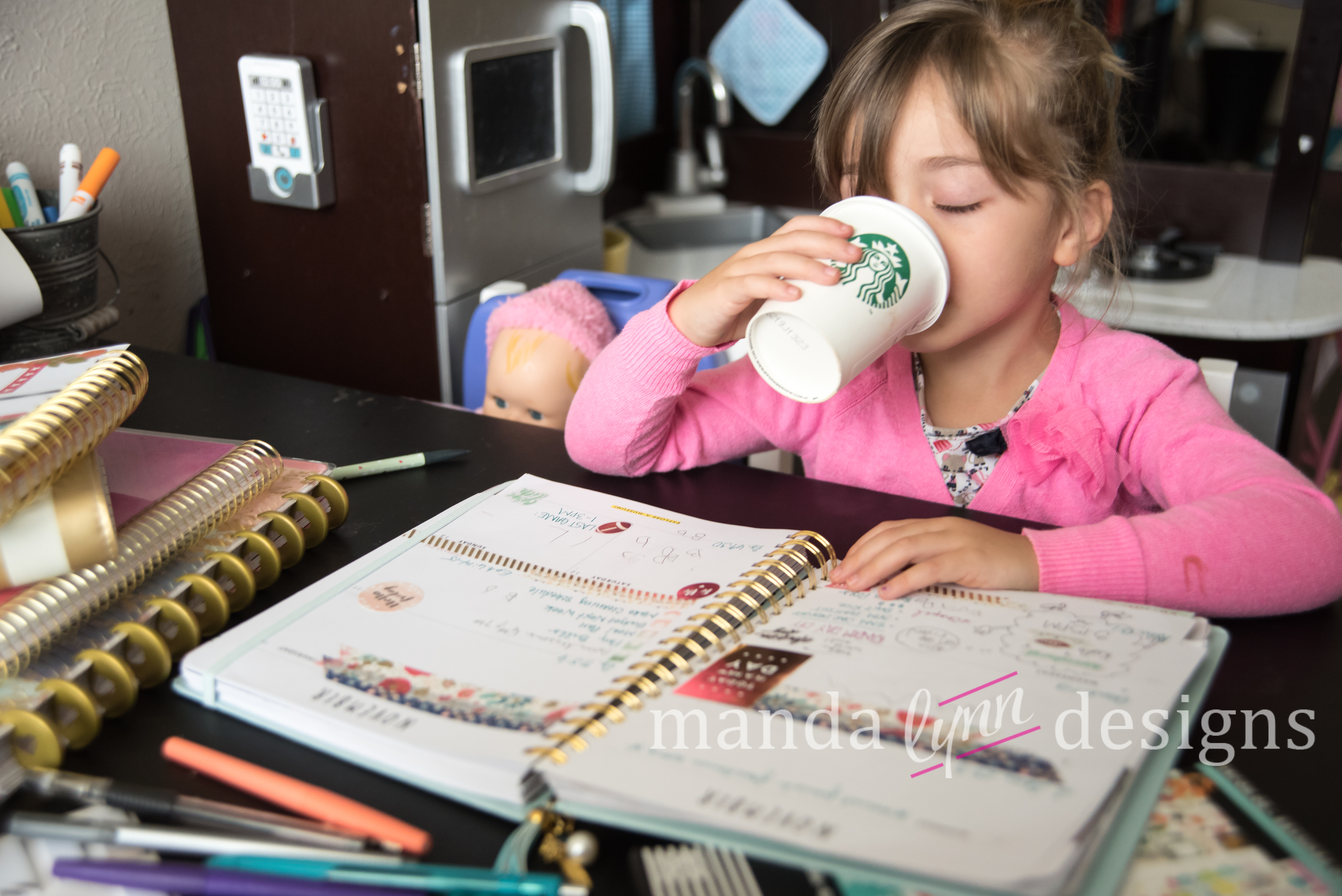